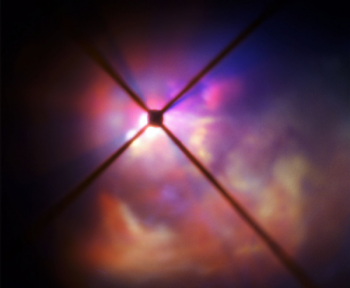 The hypergiant star VY Canis Majoris is getting ready to explode, and will shed the mass of multiple Earths along the way.

With so much going on in space, it's easy to fixate on the dramatic events of supermassive black holes or potential alien civilizations. But if you look past grand happenings, you can see fascinating events in even the finer details. Take VY Canis Majoris, a hypergiant star nearing the end of its lifecycle. Majoris will eventually explode, but that's not what has scientists talking: It's that Majoris is literally shedding its mass in the form of dust, enough to fill 30 Earths per year.

Scientists have long known that red supergiants shed dust before exploding in a firey inferno of destruction. But until recently, we haven't been able to closely examine the process for ourselves. Thankfully, ESO's Very Large Telescope has been documenting the process, giving us a better picture of the star's last moments. "Massive stars live short lives," Peter Scicluna of the Academia Sinica Institute for Astronomy and Astrophysics in Taiwan explained. "When they near their final days, they lose a lot of mass."

What sorts of things are we discovering from this dust? Other than the insane amount Majoris is shedding, the dust particles themselves are super-sized. Each particle is approximately 0.5 micrometers wide, which is 50 times larger than your typical interstellar dust particle. Of course, Majoris itself is also one of the largest stars in the Milky Way - they don't call it a hypergiant for nothing. If Majoris sat in the center of our solar system, it would easily consume Jupiter's orbit.

One day, Majoris will explode, destroying nearby dust while sending more deeper into space with heavier elements. Eventually, that dust form new stars and planets, and the circle of interstellar life will continue. That said, the explosion won't happen for hundreds of thousands of years, so for now all we can do is observe the oversized dust. Presumably any alien civilizations out there would do well to invest in a Swiffer.