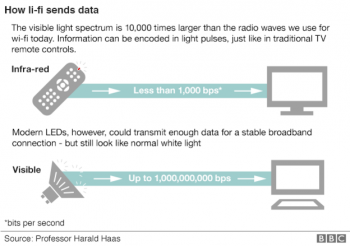 Li-fi utilizes a light source, such as an LED bulb, to deliver speeds of up to 1 Gbps.

If you ask any serious online gamer, they will tell you that having a direct cable to your router is much better than relying on wi-fi. While wi-fi is perfect for general internet browsing, for games and downloads it's just not fast or reliable enough. But that may all change with the newly tested technology of "li-fi", which can achieve stable speeds up to 100 times faster than wi-fi.

It was tested this week by Estonian start-up Velmenni, in Tallinn, who managed to achieve speeds of 1 Gbps.

Li-fi uses a light source, such as an LED bulb, along with a photo detector on the other end. As well as having the advantage of turning every light in your house into a hotspot, li-fi does not interfere with other radio signals, so could be utilized on aircraft and in other places where interference is an issue.

However, despite the lightning fast speeds, it does have a few drawbacks, namely, unlike wi-fi it cannot travel through walls, so you need a clear line of vision from the light source to your machine. Similarly, it doesn't really work outside, due to interference from the sun.

Velmenni tested the technoloy using light bulbs in an office, to allow workers to access the internet and in an industrial space, where it provided a smart lighting solution.