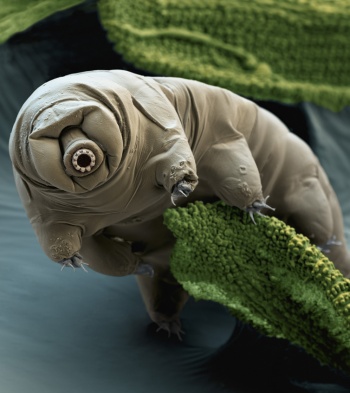 The genome of the tardigrade, sometimes called a water bear, has been sequenced, and scientists say it contains more foreign DNA than any other animal.

The tardigrade is well known in biology as an incredibly strange, nigh-indestructible animal - but above all, it is adorable. You might call it a water bear, or a moss piglet. It's got that little pucker mouth! Those itty bitty legs! It lives in puddles, people - how are there not more childrens' books written about these parthenogenic critters. If it were only one thousand times larger, it could be a household pet.

As a subject of experimentation, there is little that has not been done to the hardy water bear. We know it can survive temperatures as low as -450 degrees; as high as 300 degrees. You could vent a moss piglet out an airlock in the depths of space and, assuming you find it again, bring it back to life a few hours later.

So it is already plausible that tardigrades can live in space - but are they actually aliens? Well, no, almost definitely not. But researchers from the University of North Carolina at Chapel Hill are making us wonder. According to them, the water bear's genome is unlike anything they've ever seen - or perhaps it is like a whole lot of things they've already seen.

"We had no idea that an animal genome could be composed of so much foreign DNA," said co-author Bob Goldstein, faculty in the biology department in UNC's College of Arts and Sciences.

"We knew many animals acquire foreign genes, but we had no idea that it happens to this degree."

Find out what scientists discovered when they sequenced the octopus' DNA.

Indeed, about one-sixth of the moss piglet's DNA has a foreign source, making actually sequencing the genome an extremely frustrating process.

All animals contain some foreign DNA within them; in humans, for example, this often happens when a virus gene-swaps its way into your body. This is called horizontal gene transfer, as opposed to vertical gene transfer (when parents transfer genes to their offspring). To have alien genes make up such a large proportion of your genetic code, something very strange has to be going on.

Tardigrades, which live in the droplets of water you find in moss and plants, typically dry out for long stretches of time, before rehydrating when their environment gets wet again. During these dry periods, their DNA is extremely "brittle," and bacterial, fungal, and plant DNA can find its way in. This happens randomly, but as with traditional natural selection, the best and most useful of these tend to stick around, making micro-puppies perhaps the most adaptable animal to have ever lived.

Says Thomas Boothby, first author of the study, "Animals that can survive extreme stresses may be particularly prone to acquiring foreign genes - and bacterial genes might be better able to withstand stresses than animal ones."

Ok, I made up "micro-puppy." Children's book authors, the ball is in your court.