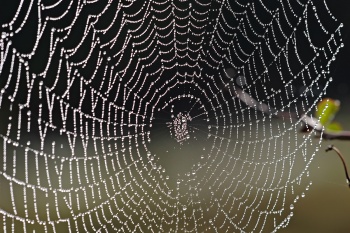 In order to unobtrusively study the behavior and diet of spiders, researchers can now extract both predator and prey DNA from webs.

It's an all-too-common, horrifying sight. A crime scene and weapon all in one; the victim bound up in silk, its innards liquefied and emptied. The murderer? Long-gone, of course, with no recourse whatsoever for the victim's ten million next-of-kin.

Until now. Finally, forensic science has advanced to the point where we can solve these horrific murders, by identifying not only the vile perpetrator's DNA in the weapon, but any past victims' genetic data, as well.

We can all breathe a little easier. Spider crime is over.

In a study published in PLOS ONE, researchers declare they have successfully extracted mitochondrial DNA from spider silk, identifying both predator and prey genes.

Their experiments involved black widow spiders, whose crimes of passion are notoriously brutal. Crickets were fed to these vicious femme fatales; later, the webs spun by the spiders were collected and examined. Lo and behold - both cricket and black widow DNA was identifiable.

While the most obvious use for this technique is to solve insect murder, the Six-legged Victims Unit has other functions in mind. Gaining dietary information from discarded webs is a very unobtrusive way of examining what is going on in spider populations - a little bit nicer than, say, cutting the spider open to check out its last meal.

This all reminds me of Patrick Stewart's efforts earlier this year to fund a different way of collecting data on whales. Now, if only we could find a way of using Snotbot to solve crimes...