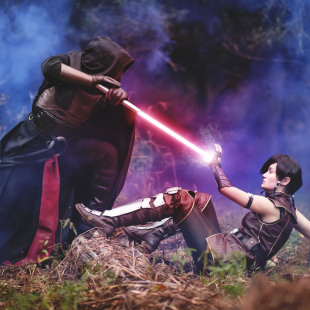 Photographer Kieran Kerrigan has released pictures from an atmospheric photo shoot that transformed cosplayers into the spitting images of two Star Wars characters.

With Star Wars: The Force Awakens mere weeks away, most of the franchise's fandom has its eyes fixed firmly forward toward the saga's future. Some Star Wars fans however, are still taking the time to look back to the universe's long and distant past. Enlisting the help of cosplayers Saphira and Blood Spider, photographer Kieran "So Say We All" Kerrigan recently pulled off what has to easily be one of the best Star War cosplay efforts in recent memory.

Eschewing the current era of the franchise, Kerrigan and company went back to the Star Wars universe as its portrayed in BioWare's MMORPG The Old Republic. With Saphira portraying the Jedi Satele Shan and Blood Spider stepping into the boots of Darth Revan, Kerrigan utilized a variety of effects both digital and practical to create some amazing pictures. "I'd been wanting to play with colored smoke grenades for a while," he said, speaking to The Escapist. "They give an amazing atmosphere so choosing something moody like The Old Republic seemed a great idea." Kerrigan would go on to say that he hopes to do another Star Wars shoot to coincide with the release of The Force Awakens.


Speaking personally, I sincerely hope he's able to find the time for that. While credit obviously has to be given to the cosplayers who participated in the shoot, I think it goes without saying that without Kerrigan's excellent photography and editing, these images might not even be half as cool as they turned out. Check them out and let us know what you think!


Source: So Say We All