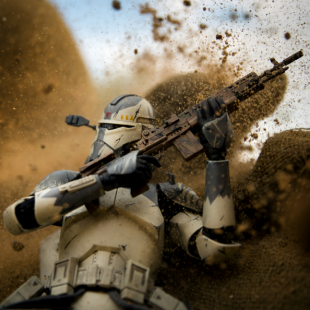 Photographer and war correspondent Matthew Callahan has created a series of photos using toys to illustrate the lives of Star Wars soldiers.

If there are two things that go together in this world, it's Star Wars and toys. Since the earliest days of the franchise, its creators and partnering toy makers have never wasted an opportunity to make toys out of anything and everything that could possibly be made into a toy. Fans, in turn, have been more than happy to buy them, spending billions on action figures, model kits and more. For Matthew Callahan though, the toys of Star Wars are more than collectibles or playthings. They're tools to tell stories.

A lifelong Star Wars fan, Callahan has been working on a photo series that he's dubbed Galactic Warfighter. It's a project that began when we he was practicing for his job as a combat correspondent. "I started photographing a six-inch Stormtrooper when I was in Maryland studying for my job," said Callahan. "Since then, my toy photography has evolved and formed into something that carries meaning." Using an expanding variety of Star Wars action figures, Callahan has uses his skills to create images aimed at showing what the experience of war would be like for "the rank-and-filed ground troops of [the] Star Wars" universe. "Conflict generally has been one of the biggest informants in the way pop culture creates stories. Galactic Warfighters is a snapshot that tethers the real and fictitious worlds more closely to each other."


According to Callahan, the time it takes to actually take these photos can vary wildly from shoot to shoot. That said, he confirmed that for every image he keeps there are "at least a half dozen failures that came before it." To help further imbue his images with a real world sensibility, Callahan also writes short vignettes to accompany many of his photos. Often done from the perspective of the soldiers pictured, it's his hope that they help to add a taste of the "experiences and hardships real men and women" encounter in war. We're going to go ahead and say that they more than get that job done. Take a look at his photos and let us know what you think.