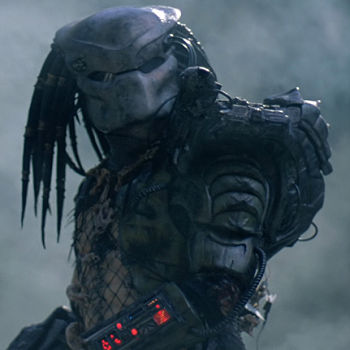 If it inks, they can script it.

We haven't heard many new developments regarding Predator 4 since the project was announced by Iron Man 3 director (and "Hawkins" from the 1987 original) Shane Black over the summer, and maybe that's for the best. What's being labeled as an "inventive sequel" that "reinvents the franchise" by Black and producer John Davis probably requires a certain amount of secrecy in order to be effective, which coincidentally, would be the last word you would use to describe the majority of Predator sequels up 'till now (the mostly-fun Predators excluding*).

Yesterday, however, we were given a somewhat huge announcement regarding the sequel from co-writer Fred Dekker, who took to Facebook to announce that the script for Predator 4: This Time It's Personal (not the actual title) had just been completed.

"A character from the new screenplay we turned in," wrote Dekker alongside some fan art from 7-year-old Angus Herndon, begging the question: Who let's a 7-year-old watch Predator?!

As we said, little about the Predator 4 plot or potential cast has been revealed other than the fact that it won't feature any of the players from 2010's Predators or original star Arnold Schwarzenegger, which makes sense given the "fresh perspective" Black is hoping to achieve in this totally-not-a-reboot-sequel.

"(It's not a reboot) as far as Fred and I are concerned anyway. Why start over, when you've all this rich mythology yet to mine?," said Black in an interview with Collider. "(However, I can) really get behind inventive sequels (and) the idea of expanding and exploring the existing Predator mythology, rather than hitting the restart button."

Black makes a good point. The mythology of Predator stretches a lot deeper than most movie monsters -- they've mastered space and time travel, for starters -- but has been neglectfully reduced to little more than "alien hunters" in recent follow-up efforts. Personally, I hope the "inventive" angle Black explores relates to the Predators backstory, and more specifically, how they come from a society that both possesses technological capabilities literal light years beyond ours, yet still resorts to primitive skull collecting for entertainment and/or honor.

And on that note, this!

*I also happen to be a fan of the Danny Glover-starring Predator 2 aka Predator: Back 2 Da Streets, but understand why it currently sits at 23% on Rotten Tomatoes.