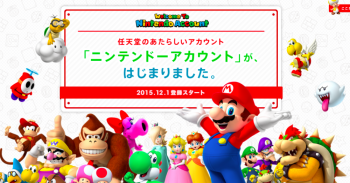 In a surprise move, Nintendo has launched the Nintendo Account in Japan three months early.

Earlier in the year, Nintendo laid out its plans for a new type of unified "Nintendo Account" that would link the 3DS and Wii U together with your PC and smartphone. At the time, Nintendo president Tatsumi Kimishima said the service would launch in March, 2016, but Japanese users will be surprised to learn that it actually launched in their home region today.

The biggest advantage of the new unified account is the ability to browse the eShop from your desktop computer or smartphone, and have purchases sent directly to their respective consoles.

As an added incentive for Japanese fans to try out the new online service, Nintendo is giving back 100 yen for every 1000 yen spent on the eShop using a Nintendo Account, from now until February 1.

Note that Nintendo's replacement to the recently discontinued Club Nintendo: My Nintendo, is still slated for a March release date, alongside the first of the company's smartphone apps: a social networking game called Miitomo.

There's no word on when any of these features will make their way over to North America.