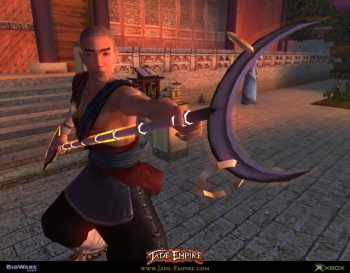 You can permanently add Jade Empire: Special Edition to your Origin library for free for a limited time.

At this stage we should all be pretty familiar with Origin's "on the house" program, where it gives away select PC games absolutely free, with no catch (except for having to download Origin, HYUK HYUK HYUK!!!). Well this time the free game is none other than Bioware's martial arts RPG Jade Empire.

Jade Empire was first released as an Xbox Exclusive back in 2005. It eventually made its way to Xbox 360 and PC as a "special edition," with several additional features and some graphical upgrades.

It will only be available for free for "a limited time" although EA didn't specify when exactly the promotion would end.