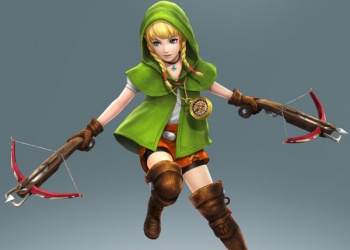 "She doesn't feel out of place at all in the world of the Zelda games."

Last month, Nintendo announced the inclusion of Linkle in the upcoming Hyrule Warriors Legends. In a recent interview with IGN, Zelda series producer Eiji Aonuma indicated that Linkle may be up for consideration in future Zelda games.

"I had a chance to give feedback on Linkle during development, but the satisfying action of using a crossbow, which we developed for the spin-off title Link's Crossbow Training, was implemented this time completely by Koei Tecmo," Aonuma said. "It may feel a little different from other titles in the franchise, but she doesn't feel out of place at all in the world of the Zelda games. I'm sure we will keep her in mind when thinking about future titles."

"We had a great response from fans, especially outside of Japan, who saw Linkle in the Hyrule Warriors premium-box booklet and wanted her to be included in the game," Aonuma said. "Seeing that reaction, Hayashi-san and I talked it over and decided that we would definitely like to include her in the next title. I'm really glad we got the chance to do that with Hyrule Warriors Legends."

Linkle was originally pitched as a sister to Link, but the team ultimately decided against that. Linkle is described as "boundlessly cheerful," kind, and naive, with a poor sense of direction, by Tecmo Koei producer Yosuke Hayashi.