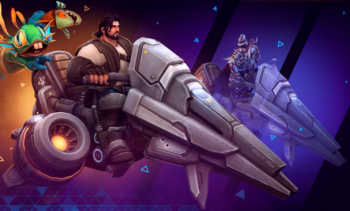 Heroes of The Storm's Recruit-a-Friend program offers rewards to both the recruiter and recruitee.

Recruit-a-Friend programs, arguably first popularized by World of Warcraft have become somewhat of a staple in free-to-play games like most MOBAs out there. Heroes of The Storm is no exception, and today Blizzard have detailed how the game's program will work, and what rewards both recruiters, and recruitees, can look forward to.

To recruit friends, head on over to the Recruit-a-Friend website and log in to get your unique URL. If a friend signs up for an account using your URL, you'll start to get some benefits. First up, all friends you recruit will instantly get the Jim Raynor hero, and a 5-day Stimpack, for free. If they reach level 10, they will also get the Sylvanas hero for free, and both of you will get the unique "Recruit-a-Friend" portrait. If you manage to recruit four friends who all reach level 10, you'll get the sick Vulture Hover Bike Mount you can see in the image above.

If you're kicking yourself because you just convinced a bunch of mates to come play with you before Blizzard announced this program, as long as they are still bellow account level 5 they can still follow your Recruit-a-Friend link and sign up for the program.

It's not really a lot, but it is a nice little way to convince new players to play. Raynor and Sylvanas are probably the two easiest heroes to learn, so it's a good choice to have them be the "free" ones.