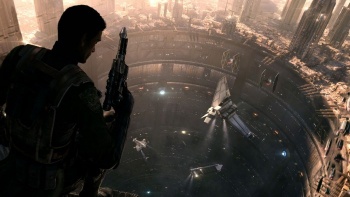 Lucasfilm is spending a lot of time looking over Star Wars 1313 assets, and certainly doesn't want to throw them out.

One of the biggest casualties of the Disney acquisition of Lucasfilm was the cancellation of Star Wars 1313, a mature-themed Star Wars action game that would have followed everyone's favorite bounty hunter: Bobba Fett. But don't hang up your jet packs quite yet, as current Lucasfilm head Kathleen Kennedy says her company is spending quite a lot of time looking over 1313 assets, with the possibility of bringing the game back from the dead.

"Our attitude [to Star Wars 1313] is, we don't want to throw any of that stuff away. It's gold. And it's something we're spending a lot of time looking at, pouring through, discussing, and we may very well develop those things further. We definitely want to," Kennedy told Slashfilm.

Before you open up your wallets, keep in mind that in this post-LucasArts world, that statement could mean a lot of things. First up, now that LucasArts has been shut down, EA holds an exclusive licence to make Star Wars games, so if we did see 1313 revived in its original form, it would be via EA.

Secondly, in the same Slashfilm interview, Kennedy brought up the also canceled Star Wars live action series: Star Wars Underworld, stating that she would also like to revive that. It's quite possible a lot of 1313 concepts could get rolled into an Underworld revival, or even a stand-alone movie a-la Star Wars: Rogue One.

I would cross my fingers for it being revived in game form, but after having played Battlefront... I think I would settle for a stand-alone movie...