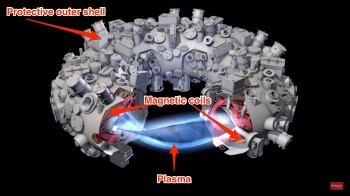 On Thursday, December 10th, researchers at the Max Planck Institute for Plasma Physics in Germany fired up a monstrous machine capable of containing a small sun.

19 years after construction began, with 1.1 billion dollars spent and 1.1 million hours worked, the Wendelstein 7-X is ready to capture a sun.

The Wendestein, or W7-X is a type of nuclear fusion reactor called a stellarator. Note the root word there: stellar - this thing is making and harvesting a sun. It is the largest and most complex machine of its kind ever built, and its modern-art-like design was conceived with the help of a supercomputer.

Nuclear fusion could, the theory goes, become the most efficient and clean energy sources our planet has ever seen, but no such device has ever proved to work. The closest cousin to a stellarator, the tokamak, has been built hundreds of times, but has some key weaknesses. Researchers at the Max Planck Institute for Plasma Physics see the stellarator as an immense step forward in nuclear fusion technology.

The generators work by containing super-heated plasma within a circular cage by magnets fields. The magnets are super-cooled to -270 degrees celsius; the gas that is contained in the machine, flowing by just a metre away from magnet-lined walls, heats to about 100 million degrees.

The design of a tokamak is basically a doughnut shape, or torus. The stellarator, by contrast, flattens and twists the super-heated plasma as it spins through its cage, creating something akin to a mobius strip, or the most nausea-inducing Roller Coaster Tycoon ride I ever built. While a tokamak can only function for minutes at a time before shut down, and cannot produce more energy than it takes to tun it on, the stellarator is expected to work for about 30 minutes at a time thanks its more efficient design.

This is one of the most fascinating cross-sections of science, to me: it took physicists decades to figure out the awe-inspiring task of containing what amounts to a small star using nothing more than powerful magnets; from there, it became a matter of geometry to get the most efficient shape to present itself. And how did we get that shape? A supercomputer.

Any day now, we'll be asking the Last Question for the first time.