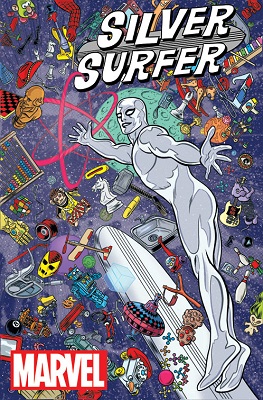 Dan Slott's Silver Surfer was easily one of the best and most bizarre series that Marvel had running before it shook things up with Secret Wars. Coming to a close alongside that event, Marvel intends to relaunch the comic this January with Slott again in the writer's seat. The new series will continue the story of the titular Surfer and his companion Dawn Greenwood. That being the case, if a recent preview is an indicator, Slott and company will be taking the duo to places a tad more local than the usual standard of their previous adventures.

More specifically, the new book will turning its eyes toward Earth. Whereas Slott's previous Surfer series was all about him showing Dawn the universe, the new comic will focus on the two exploring her home planet. "The Silver Surfer has shown his companion Dawn Greenwood the cosmos," wrote Marvel, in a release. "But now, the time has come to show her the most fantastic plant of all- Earth!" The statement goes on to make some big promises not excluding "monsters, magic, monumental moments" and "a secret that will change everything!"

Speaking personally, I absolutely adored what Dan Slott did with pre-Secret Wars Silver Surfer. Perpetually weird and never afraid to have fun with its oddity, the comic told some fantastic stories and also managed to create of one Marvel's best new characters in Dawn Greenwood. Like more than a few people, my December brain is currently focused on the narrowing wait for Star Wars: The Force Awakens. That said, it's good to know that once that's passed I'll have something else look forward to in January.