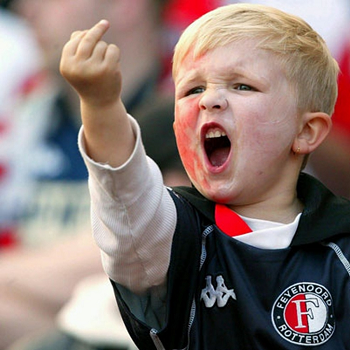 For most of our lives, our ass-hat parents and peers have tried to convince us that swearing was not only ill-mannered, but unintelligent. We've always known it to be bullshit -- George Carlin based entire bits around swear words and he was one of the smartest f*cking people to ever walk this planet -- but we've never had the goddamn evidence to back up ours, our his, claims.

Well, thank f*ck, everything is about to change.

That's because Drs. Kristin and Timothy Jay, two psychology-teaching sonsabitches over at the Massachusetts College of Liberal Arts, have published new research in Language Sciences which argues that a fluence in swearing actually points towards a healthy verbal ability, not the "poverty of vocabulary" that's been previously suggested by linguistic experts (and our grandmas).

Basically, we're not dumbasses because we call each other "dumbass."

The study conducted to prove the Jay's theory was a simple, if interesting one: A group of students were tasked with saying as many swear words as they could think of in the span of one minute. The results, as BPS Research passes along, were that "taboo word fluency is correlated with general fluency." (Damn right it is.)

"But of more interest was the observation that these word production scores were positively correlated with one another. In other words, the volunteers who could produce the most swear words tended also to be able to produce the most animal words and non-swear words. Yet if swearing was a sign of an impoverished vocabulary, then the opposite should have been the case. The same pattern was seen when volunteers wrote down swear words rather than saying them out loud."

While not exactly what you would call "definitive proof" that swearing = intelligence -- the study failed to address the relationship between *frequency* of swear words used and a person's IQ, for instance -- the Jay's did more-or-less prove the "fluency-is-fluency" hypothesis that they set out to. In having a diverse vocabulary of swear words, it seems that dipshits like us are actually able to emotionally express ourselves more diversely than the average asshole.

So the next time you find yourself at a family party, gala event, or social gathering in general, show off your intelligence with a few finely crafted f-bombs. Got it, ya jackasses?