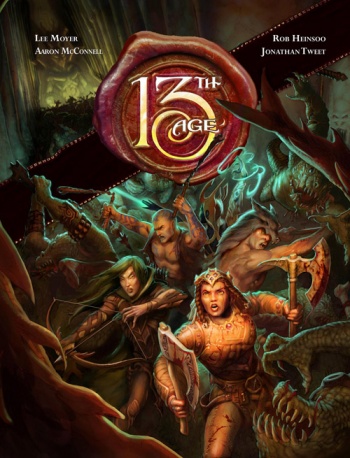 Pelgrane Press' 13th Age, a d20 RPG from D&D third and fourth edition designers, has arrived for a limited time on Bundle of Holding.

It's hard to understate how divisive Dungeons and Dragons' third and fourth editions were for the tabletop community. 3.5 was beloved by many, but threw an overwhelming volume of rules at players. Meanwhile, D&D 4 was a mechanically thorough fantasy RPG, but some players disliked linking the board game-like resolution to their roleplaying. 13th Age was one game that tried to fill this gap. Created by Rob Heinsoo and Jonathan Tweet - the lead designers of D&D's third and fourth editions - 13th Age aimed for a d20 experience both camps could enjoy by merging story and simulation elements.

Sound interesting? Well now you can pick up an entire collection for yourself - Bundle of Holding is offering an entire 13th Age library for the next two weeks.

13th Age can be treated as a sourcebook for fantasy campaigns, or a standalone game that combines old-school and new-school ideals. Its unique selling point is Icons, powerful NPC archetypes that preserve the Dragon Empire or threaten it with destruction. During character creation, players forge relationships with Icons to determine their own personal history. Maybe your hero works for the Archmage, or opposes the Orc Lord, or is the bastard son of the Emperor. 13th Age's relationship mechanics will then have various effects on your story, determining which allies and enemies will help or hinder you along the way.

As always, Bundle of Holding is offering an impressive collection of 13th Age books. Outside of the Core Rulebook, the Starter Collection features the 13 True Ways expansion and the official 13th Age soundtrack. Upgrading to the Bonus Collection provides a ton of GM resources: There's the 13th Age Bestiary with 200 new monsters. You also get a Book of Loot filled with goodies to be found during campaigns. Shadows of Eldolan is an adventure for 1st-level heroes. But one of my favorite s is Eyes of the Stone Thief, a complete campaign about a living dungeon that attacks cities. How cool is that?

Not only that, other 13th Age supplements have been added since the bundle's launch. For example, you can snatch up a one-use magic item book Candles, Clay & Dancing Shoes and the Bundle of Holding-exclusive campaign Diamonds and Shadows.

Since I'd never personally played 13th Age, I asked The Escapist's Tabletop editor Jon Bolding what he thought. His response? "I think anyone who loves D&D or Pathfinder could learn a lot about the games by just reading 13th Age." If that sounds intriguing, you can pick up the set from Bundle of Holding anytime within the next 12 days.