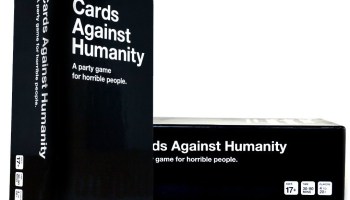 "This doesn't undo the ways that all of us profit from unfair working conditions around the world, but it's a step in the right direction."

This year, 150,000 people signed up for Cards Against Humanity's Eight Sensible Gifts for Hanukkah, a seasonal promotion where the creators send eight mystery gifts over the month of December to everyone who signed up.

"Like many of the physical products we buy, most of these gifts were made in China," a post on the Cards Against Humanity website reads. "This is something a lot of companies don't like to draw attention to, and as a result Americans often don't see the labor that goes into the things they buy. But we've always viewed the way our stuff is made as a part of who we are."

The post states that, while their factory in China "provides excellent wages and working conditions," Chinese working conditions tend to be more strict. As the printer did not have any official procedures in place for paid vacations, Cards Against Humanity bought the factory's full capacity and paid the workers to produce nothing for one week, giving them all a paid vacation.

"The printer didn't have any formal procedures for paid vacations, so we bought 100% of the factory's capacity and paid them to produce nothing for a week, giving the people who make Cards Against Humanity an unexpected chance to visit family or do whatever they pleased," the post reads. "This doesn't undo the ways that all of us profit from unfair working conditions around the world, but it's a step in the right direction."

The post also includes photos and "thank you" notes from the workers.

On Black Friday this year, the website offered a "special offer:" the option to "Give Cards Against Humanity $5" in exchange for nothing. According to a ticker on the website, a total of 11,248 people paid $71,145 for nothing.