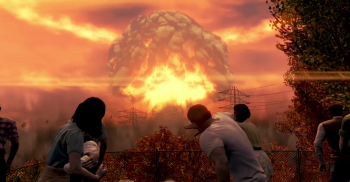 The man claims Fallout 4 cost him his health, job, and marriage.

According to a report by RT, a Russian man says that he is suing Bethesda for 500,000 rubles ($7,030) because he was not warned that Fallout 4 would "become so addictive."

The report states that the man went on a 3-week gaming marathon, neglecting his job, ignoring his friends and family, and failing to eat or sleep. This allegedly cost him his health, job, and marriage.

According to the man's lawyers, they want to see "how far we can go regarding this case."

TechTimes reports that the man felt Bethesda and Russian localization company SoftClub should have placed a label on the game, warning that it could become addictive.

RT points out that this is not the first case of a fan suing over "addictive" video games. In 2010 a Hawaiian man, Craig Smallwood, demanded damages from NCsoft after spending 20,000 hours playing Lineage II.