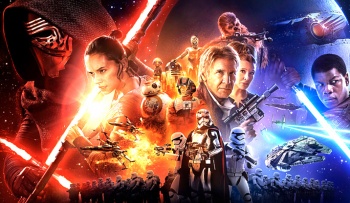 Entertainment Weekly reports that J.J. Abrams, speaking at a Writers Guild of America event this past weekend, discussed why *that scene* was necessary for Star Wars: The Force Awakens.

Seriously, if you haven't seen it, click that little "x" in the top right corner. Click "back." Anything.

You've been warned: Big spoilers ahead.

If you're still reading, then you've probably seen the movie and already know that Kylo Ren kills his father, Han Solo, with a lightsaber to the chest. It was an emotionally charged scene that shocked every person sitting in the theater with me - and probably with you too.

Abrams addressed the scene, and why it was crucial to the film. Kylo Ren, unlike Darth Vader, was introduced to viewers as a villain on a journey. His mask was removed early, showing a young man with inexplicably beautiful hair (seriously, his hair should have gotten messed up with that helmet) who was still attempting to find himself and his place in the world. In order to portray him as the villain he is meant to be, Abrams said they had to do something "bold."

"Star Wars had the greatest villain in cinema history. So, how you bring a new villain into that world is a very tricky thing," Abrams said. "We knew we needed to do something f-king bold. The only reason why Kylo Ren has any hope of being a worthy successor is because we lose one of the most beloved characters."

It's an emotional scene, with Solo reaching out to his son with hopes of pulling him back from the clutches of the dark side. With this final act, the series' villain completed his transition from Ben Solo to Kylo Ren. Abrams said that The Force Awakens was intended to be about the evolution of both hero and villain, and that without a bold act, the movie "wouldn't have any guts at all."

As necessary as Abrams feels the scene was, he also admitted that it was difficult to shoot.

"It was really chilling," Abrams said. "Seeing these two actors, they weren't chewing up the scenery. They were just doing this thing in a way that, frankly, was disturbing. To see Harrison reach out and touch Adam. I know this sounds stupid, but literally watching it, I forgot - I forgot that he wasn't his son. He did it so beautifully."