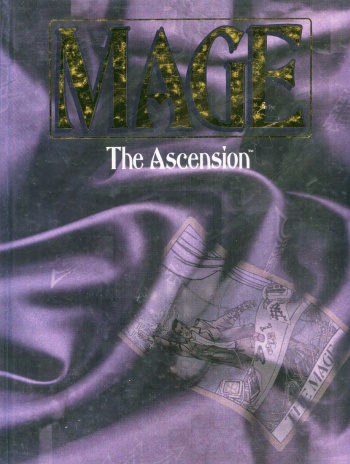 White Wolf's classic game of magic and concencus reality, Mage: The Ascension, has arrived on the Bundle of Holding.

White Wolf has quite a few RPGs in its World of Darkness stable, including Vampire: The Masquerade, Werewolf: The Forsaken, and many more. But few were quite as outrageous and mind-expanding as Mage: The Ascension. This game let players rewrite the laws of reality, creating some of the most memorable sessions in White Wolf's history. If you've never played Mage before, you now have a great excuse to try it - an entire Mage: The Ascension collection is available from the good folks at Bundle of Holding.

Mage introduces "Awakened" humans who follow a path to self-discovery granting them mastery over the universe. But instead of simply handing players a D&D-style list of spells, Mage gave players spheres of influence which could be combined to create unique effects. It also placed a huge emphasis on themes of concencus reality. In short, Mage's magic is altered by the beliefs of those who witness it - if you cast a destructive fireball spell within view of someone who believes that's impossible, it fails to materialize. This prompted players to find creative uses of magic that slip past the concencus reality while still achieving their goals.

Alternatively, you could project your avatar to Jupiter and wage magic wars across its moons. Yeah, Mage could be all over the place in tone, something its fans absolutely adored.

The Bundle of Holding Player's Collection comes with a solid starting library of Mage: The Ascension books. You start with the Second Edition Core Book, offering a revised look at this classic World of Darkness setting. It also includes a Player's Guide and two Mage sourcebooks (The Book of Crafts and The Technomancer's Toybox). Paying above the average unlocks the Storyteller's Collection, with additional sourcebooks for anyone running a Mage game. Specifically, it grants The Storyteller's Handbook, the critically-acclaimed Guide to the Technocracy, The Book of Chantries' magical locations, The Book of Madness' NPC adversaries, and The Book of World's guide on exploring other planets.

Whichever collection you go with, that's a great way to collect several sourcebooks from this beloved gaming classic at once. Bundle of Holding will run the promotion for two weeks, donating ten percent of proceeds to the Electronic Frontier Foundation.