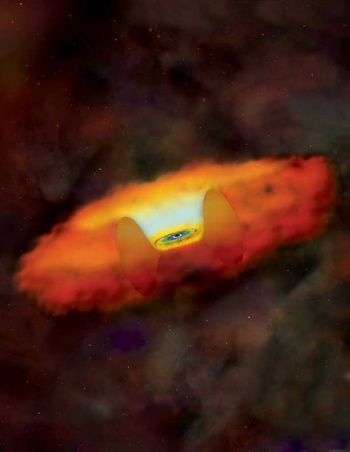 What's the largest possible mass of a black hole? According to a new scientific study, perhaps as high as 50 billion suns.

Black holes are still one of the biggest mysteries in astronomy, both literally and figuratively. That's why scientists study them so intensely, whether measuring their size or checking to see if they're doorways to other dimensions. But there's much we don't know, including their maximum size. Astronomical theorist Andrew King of the University of Leicester tried to solve this problem by calculating the highest possible growth of a black hole. According to his study, it seems they're capable of carrying a staggering mass of 50 billion suns. (For context, supermassive black holes near our galaxy are roughly six billion suns strong.)

After black holes are born from the intense gravitational pressure of collapsing stars, they continue to grow by feeding on whatever unlucky stellar phenomena happens to be nearby. This food source is usually interstellar gas, which settles into a convienient disc shape around the black hole. Based on King's calculations, once the black hole reaches 50 billion solar masses, the disc is too unstable to be maintained, breaking down its chain of growth.

King does admit, however, that it's possible for black holes to grow beyond this 50 billion mass limit. But at those levels, they require something more substantial than gas. "Bigger black hole masses are in principle possible," King writes. "For example, a hole near the maximum mass could merge with another black hole, and the result would be bigger still. But no light would be produced in this merger, and the bigger merged black hole could not have a disc of gas that would make light."

That's right, these utterly massive black holes would be practically invisible. It's one of the few cases where the bigger something is, the stealthier it gets, like some kind of black hole ninja. Thankfully none of these black holes seem to be near the Earth ... at least, not that we know of.