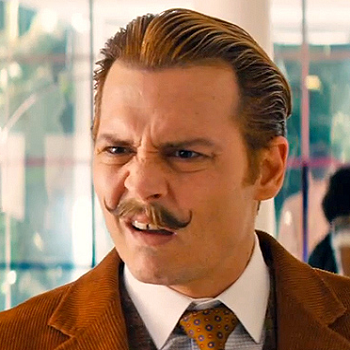 If there was ever a time for Michael Bolton to take over the Pirates franchise, it's now.

Johnny Depp seems like an all around swell guy. He's humble despite his success, he stays out of the press for the most part, he even visits sick kids in the hospital while dressed in character. Unfortunately, most of his recent efforts -- chiefly, Mortdecai -- have been released to increasingly diminished returns and even more unfavorable reviews.

As such, Depp was most recently given the not-so-honorary title of "Hollywood's Most Overpaid Actor" by Forbes magazine as part of their yearly countdown.

The "achievement" tops off a rough couple of years for Depp, who ranked second in Forbes' list in 2014 thanks to his roles in such flops as Transcendence and Tusk. But even with the critically-lauded Whitey Bulger biopic Black Mass underperforming at the box office as well, Depp's upcoming turns in the Alice in Wonderland sequel, Through the Looking Glass and Pirates of the Caribbean: Dead Men Tell No Tales (scheduled for 2016 and 2017 releases, respectively), would lead one to believe that he will find himself lower (or hopefully off) the list by this time next year.

The top 10 "most Overpaid Actors" are below, via Forbes:

When looking at the names and return rates here, it's hard not to see this list as somewhat...exaggerated. Tom Cruise, for instance, only starred in one movie this year -- Mission Impossible: Rogue Nation -- which returned nearly $700 million on a $150 million budget. Calling Cruise, or any actor, director, plumber, or barista who returns nearly $14 for every $1 they earn "overpaid" is a bit of a stretch to say the least. Even Denzel Washington, who hasn't starred in a movie since 2014's The Equalizer -- which earned $192 million on just $55 million, by the way -- somehow wound up on this list. So yeah...maybe take this list with a grain of salt.

In any case, it doesn't look like an inclusion here is going to stop Depp from doing what he does best: starring in blockbuster sequels that require him to wear lots and lots of makeup and make even more goofy faces. And who can put a price on that?