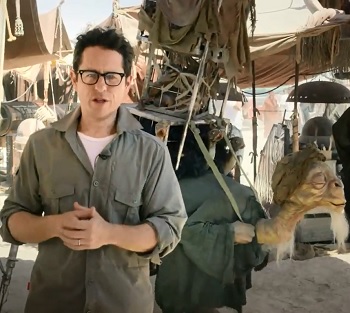 J.J. Abrams has read the Star Wars Episode VIII script, and loves it so much, he regrets leaving the director's chair.

Star Wars was an undeniable success last week, both critically and financially, welcoming a new generation to the galaxy far, far away. Of course, many long-time fans are wondering one thing: What's planned for Episode VIII? We won't know for another two years, but executive producer J.J. Abrams reportedly loves the script. In fact, he thinks it's so great, Abrams wishes he was directing instead of Rian Johnson.

The information comes from The Force Awakens' Greg Grunberg, who worked with Abrams on projects like Lost, Felicity, and even Star Trek. "He read it and said something he never, ever says," Grunberg said, expressing Abrams' regret that he wasn't directing. "He may have said something one time on Lost, with Damon [Lindelof], but I never hear him express regret like that."

Directing Star Wars is a dream, but stepping away is understandable, given Disney's rigorous filming schedule. The parent company already wants to make a movie each year, and would probably raise it to Marvel-esque multi-film deals if it proved financially feasible. That's great for fans, but absolute hell for cast and crew, prompting J.J. Abrams to step into an executive role instead. So if Episode VIII is still making Abrams regret his decision? It might be incredibly good indeed.