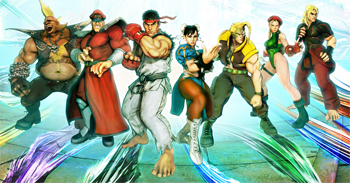 Sagat won't be in the new Street Fighter because there are "too many similar characters".

Street Fighter V made lots of Street Fighter fans very happy when it was announced last year. However, now that we know the full character roster, as well as the first wave of DLC characters, one subset of fans are quite disappointed: Sagat mains. Sagat has been a mainstay of the series, appearing in every main Street Fighter title since the original. However, he will not be in Street Fighter V, and now Capcom has explained why.

"It's because there are many characters that perform similarly," developer Yoshinori Ono told Famitsu. "For this launch and its next update, we wanted to have a good balance of characters. Since we didn't want to just blindly increase the number of characters, it was a bitter decision that had to be made."

But don't lose hope, Sagat fans, for while the muay thai expert won't appear in the game at launch, "I understand that there are also many who wish to see other characters besides Sagat, such as Blanka and more. There's a possibility that we may add more characters in some form later, so please look forward to that," said Ono.

He confirmed that there will be no additional characters released in 2016, aside from the six previously announced (Alex, Guile, Ibuki, Balrog, Juri and Urien).