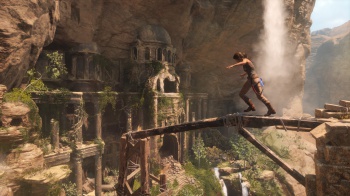 A Steam store listing has confirmed that Rise of The Tomb Raider will launch on PC this January.

One of the best games no-one played of 2015 was easily Rise of The Tomb Raider, due partly to the fact that it launched at the same time as Fallout 4, and partly because it was an Xbox One exclusive. Due to said exclusivity deal, Square Enix stated that the game wouldn't launch until "early 2016" for PC. Steam has now confirmed that the PC edition of Rise of The Tomb Raider will release some time in January.

You can't pre-purchase the game as of yet, so we're probably looking at a later, rather than earlier, January release. Also keep in mind that this has come from Steam, and isn't an official announcement from Square Enix, so that date may change.

PS4 owners are unfortunately in for a bit longer wait. Due to the exclusivity deal, the game won't release on Sony's platform until "Holiday 2016" at the very earliest. Ouch!