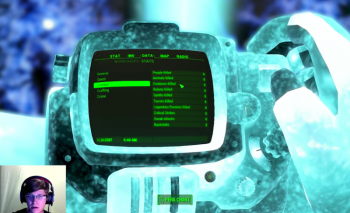 Fallout 4 often demands you shoot people in the face. To this, gamer Kyle Hinckley says "no".

"I can't tell you that you can play the whole game without violence - that's not necessarily a goal of ours," Fallout 4 lead designer Todd Howard said back in July, 2015. While most people would take this quote at face value, gamer Kyle Hinckley took it as a challenge. Hinckley has just accomplished the unthinkable: completing a full "pacifist" run of Fallout 4, where his character doesn't kill a single person, creature, or mutant.

You can watch the entire series of Hinckley's play-through right here, but keep in mind there are a few caveats. First up, to make it even more impressive, Hinckley is playing the game on "survival" mode - the hardest difficulty in the game. And, while his character technically never kills anyone, it doesn't mean no blood is shed. With a very high charisma stat, Hinckley is able to convince various characters to do his dirty work for him. It's worth noting that Hinckley achieves all of this without the use of a companion, as any kills made by your companion count towards the kill count.

He says that the hardest part of the game is the *SLIGHT SPOILERS AHEAD* fight with Kellogg. Kellogg is a character that absolutely has to die for the story to progress. In the end, he managed by luring Kellogg onto some mines to bring down his health, and brainwashing his AI goons into landing the killing blow.

"I'd love to ask [Todd Howard] why pacifism is so difficult in this Fallout," Hinkley Told Kotaku. He said that as a result of his pacifist playthrough, the game "broke" several times. It didn't know how to react to a player who could simply pacify every enemy, and would do weird things like spawn additional enemies, or cause NPCs to shut down completley, and cease to interact with the player.

In contrast, Hinckley says that Fallout: New Vegas had a pacifism option built-in from the ground up, as the player could talk his way out of most situations.