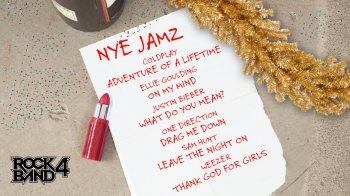 Harmonix announced in a blog post today that six new tracks will be making their way to Rock Band 4 in celebration of the new year. The songs, from Coldplay, Ellie Goulding, Justin Bieber, One Direction, Sam Hunt, and Weezer, will be available on the storefront for $1.99 each as of December 29.

The new songs are:

Harmonix also revealed that Rock Band 4 bundles will be on sale at GameStop, including the lowest price so far on the Fender Stratocaster Guitar Bundle at $79.99.

In other Rock Band 4 news, Harmonix recently announced that it would be wiping the leaderboards for all songs due to an exploit that allowed drummers to double trigger overdrive.