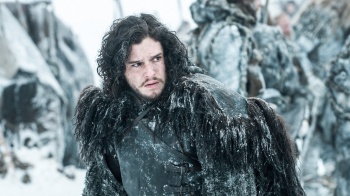 HBO's Game of Thrones remains the most-torrented TV series of 2015, with finale downloads ranging in the millions.

Pretty much everyone is a fan of HBO's Game of Thrones at this point. And it's easy to see why - between Arya training under the Faceless Men, Tyrion meeting dragons, an epic White Walker battle, and that spoilerific final scene, Season 5 proved to be as compelling as ever. But there's another reason Game of Thrones was so widely viewed: It's the most-pirated TV series of 2015, with download numbers climbing far above those of legal viewers and cable subscribers.

Game of Thrones torrents were already off to a strong start thanks to four episodes which leaked early last April. By the time June rolled around, the Season 5 finale was downloaded an estimated 1.5 million times within 12 hours of the premiere. Current reports now suggest the finale has accumulated 14.4 million downloads, over half of which occurred a week after it aired. Meanwhile, the number of viewers watching Game of Thrones legally sits at about eight million.

Of course, these high piracy numbers aren't surprising - Game of Thrones is an insanely popular show airing on a cable network which only just starting offering streaming options this year. Game of Thrones is also crushing the competition among other torrented TV series, with The Walking Dead and The Big Bang Theory sitting at 6.9 and 4.4 million respectively.

"I probably shouldn't be saying this, but it is a compliment of sorts," HBO programming president Michale Lombardo said back in 2013. "The demand is there. And it certainly didn't negatively impact the DVD sales. [Piracy is] something that comes along with having a wildly successful show on a subscription network."

With Game of Thrones' sixth season premiering in April, we'll soon learn whether HBO's streaming channels will put a dent in those numbers for 2016. But one way or another, I suspect all of us will be eagerly watching Game of Thrones next year.