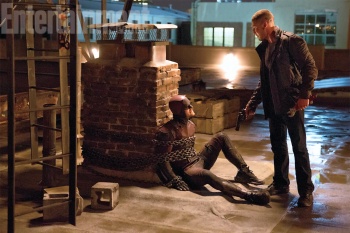 Jon Bernthal doesn't have his skull shirt yet, but this Daredevil Season 2 photo still contains a familiar Punisher.

This has been a great week for superhero costume reveals, starting with Benedict Cumberbatch's Doctor Strange. But if you're more interested in the antiheroes of Netflix's Hell's Kitchen? You'll be glad to hear we finally have a glimpse of Daredevil Season 2's Punisher. Played by Jon Bernthal, this new antihero looks the part (despite lacking a skull t-shirt) while recreating an iconic scene from the Punisher Marvel Knights series.

In the comics, Punisher was first introduced as a Spider-Man villain, but quickly became a dark counter-point to Daredevil's vigilante lifestyle. While both fight street-level mobsters, Punisher is far more unstable and has no objection to killing opponents. He's also one of the few iconic Marvel characters who wields firearms, which Daredevil's showrunners know makes him a controversial figure.

"Viewers watching the show will be rooting for this guy with a gun but we're also going to force people - the way we force Matt - to second-guess themselves," Daredevil's Doug Petrie explains. "Taking lethal justice into your own hands in America in 2015 is tricky s-t. We have not shied away from the rich complicated reality of Now. If you've got a gun and you're not the police you're going to incite strong feelings. We're stirring the pot and we're aware of the headlines where we live and we're trying to get people to think."

Take the photo itself, revealed on Entertainment Weekly: It shows Daredevil in chains while Punisher stands over him with a revolver. But Punisher has no intention of killing him. This shot recreates a scene from Garth Ennis' and Steve Dillon's Punisher series, where Punisher gives Daredevil the gun, and a choice. Will he kill an anti-hero to save violent criminals, or spare his life and let them die?

Daredevil may have undergone some creative changes since Season 1, but if Bernthal's Punisher is presented in this fashion? We can expect all the moral ambiguity that made the series so appealing. The new season airs on Netflix in 2016.