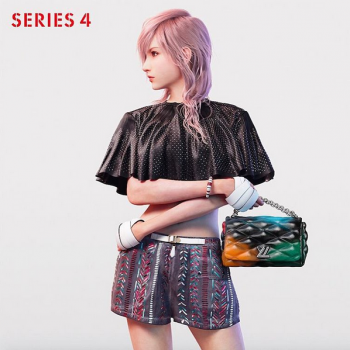 Let's say you're Lightning, protagonist of the Final Fantasy XIII series. You've saved the world, fought through multiple sequels, and even crossed dimensional boundaries for a Final Fantasy XIV event. But with no new game appearances on the horizon, what can you do next? Apparently, the answer is return to the fashion industry and take up modeling. That's right - if you look at promo materials for Louis Vuitton's spring collection, you'll find Lightning sporting a wide variety of new outfits.

This isn't the first time Lightning has "modeled" for the fashion industry - her likeness was used by Prada back in 2012. But that just makes her a natural fit for creative director Nicolas Ghesquiere's new line, which draws from a range of manga, anime, and video game related content. (It even managed to squeeze in some Minecraft references and a sci-fi version Pulp Fiction's Mia Wallace.)

Lightning herself appears to have a prominent place in the line, complete with multiple outfits and accessories in recent advertisements. Perhaps that's appropriate, given Ghesquiere's Instagram posts which state: "Reality and fantasy become one". It's not clear whether Lightning's outfits are a central part of the entire line, but her pink motorcycle jacket, black skirt, and sandals have appeared on a real world model during a recent fashion show.

This sort of thing is increasingly normal in a world where Halo's Cortana also supports Microsoft products, but it's still a little strange to see gaming characters bleed into high fashion. But hey, if there are any Final Fantasy players out there who also happen to be Louis Vuitton customers, they'll probably have a field day with this spring collection.