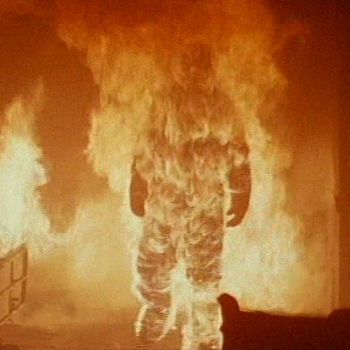 It's been 20 years since Dimension Films first scooped up the rights to the Halloween franchise, and the results thus far have been...mixed to put it kindly.

From the thoroughly underwhelming sixth entry, The Curse of Michael Myers (made notable only for being the final screen appearance of Donald Pleasence and an early one of Paul Rudd), to the surprisingly good H20, to the reprehensible and ridiculous Resurrection and finally, Rob Zombie's pair of unmemorable pseudo-remakes, The Weinstein Company's production house just never seemed able to dial in on what made John Carpenter's original horror masterpiece such a hit -- which, to be fair, can be said about *any* Halloween sequel barring the second.

Still, Dimension announced plans to begin production on the next chapter of the franchise, titled Halloween Returns, back in July, with Saw and Feast writers Marcus Dunstan and Patrick Melton attached to write. But the best laid plans often go awry, as they say, which makes today's news that Dimension has lost the rights to the Halloween franchise sting like a knife to the ribcage.

According to a report by Blood Disgusting (and later confirmed by The Wrap), Dimension's inability to get things in motion has cost them dearly and seen the rights to Halloween have reverted back to the franchises original owners, Miramax. As a result, Dunstan and Melton have been sh*tcanned from the project, which was reportedly set to be an "old school, subtle reboot" that would have taken place directly after Halloween 2 and completely erased the events of the films that followed.

"The coolest thing we've done so far is a couple motion tests of potential Michaels," said Dunstan while discussing the project. "I want to see a film shot on film. I want it to be one that stands on its own. Suspense isn't expensive. A karate fight in a burning room is expensive. Michael Myers is subtlety and suspense."

Subtlety? In an American horror film? What a novel idea.

But hope is not lost, for Miramax is currently shopping around for a new distribution partner, which could open up the possibility for one of those crossover films that seem to be all the rage these days. If Halloween lands with Paramount, we could be looking at Michael Myers vs. Leatherface. If it ends up at Warner Bros., who would be against the idea of Freddy vs. Jason. vs. Michael Myers? Because...not this guy.

It's too early to tell where Halloween will go from here, obviously, but for the first time in years, the franchise actually has a lot of promise and potential behind it, which is saying something for a series that has grossed over $623.8 million to date (once inflation is factored in). Let's hope that Miramax doesn't screw this up.