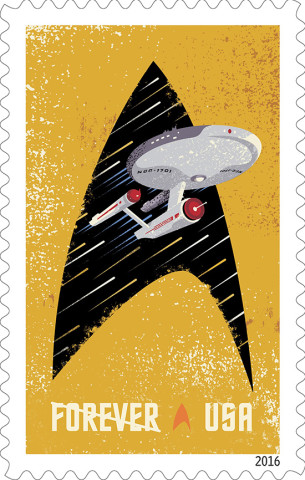 The USPS will be releasing four new Star Trek-themed Forever stamps in 2016.

In the decades since its inception, Star Trek has sent its fans on countless adventures through time, space and then some. Now, thanks to the United States Postal Service, the franchise is readying for a journey through yet another new frontier: the mail.

To help celebrate the franchise's 50th anniversary as well as the nearing release of Star Trek Beyond, the USPS has unveiled a new collection of Star Trek-themed Forever stamps. The collection will include four stamps based on "classic elements" from the original TV show. The first will feature the Starship Enterprise "inside the outline of a Starfleet insignia against a gold background." The second will be the silhouette of a crewman standing in the iconic transporter. The third will be a silhouette of the Enterprise against a green background and, finally, the last stamp will feature the Enterprise inside the shape of a hand performing the Vulcan salute. As with all current Forever stamps, the Star Trek stamps will cost 49 cents each.

Now granted, journeying through the postal system isn't exactly the sort of grand adventure that Trek fans have come to enjoy over the years. Even so, there's little denying that these are still pretty danged cool-looking. And just speaking personally, they couldn't have come at a better time. I just ran out of Batman stamps and was already in the market for something nice and nerdy to replace them. These will more than do the trick.