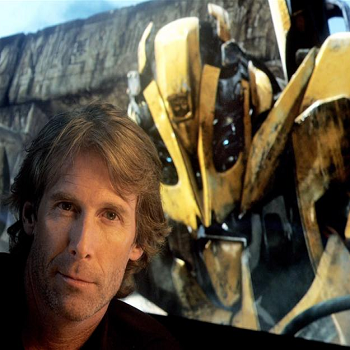 Michael Bay's Transformers series has been a divisive one to say the very least. While most of the online community seems to utter a collective groan of disgust every time another one is announced, the movies themselves have been nothing short of crack cocaine at the box office, with the *lowest* grossing entry of the franchise still managing to reel in over $700 million. Say what you want about Bay's technique; there's no denying that the guy knows how to make money faster than Jack Donaghy.

But if you thought for one second that Bay would call it a day after 2014's Age of Extinction, retire, and quietly spend the rest of his days floating in the swimming pool filled with Velveeta cheese that his hard work had earned him, well think again! The man who treats restraint like Jack McCoy treats a hostile witness, for Christ's sake!

While promoting his latest non-robot fighting film, 13 Hours: The Secret Soldiers of Benghazi, Bay spoke to Rolling Stone about his plans for the Transformers franchise.

You gotta love how even Bay is starting to lose track of where he is in the Transformers saga at this point. Either his movies are starting to become as monotonous and interchangeable to him as they are to the rest of us, or as I believe, he's become so rich because of them that he's grown nearly incapable of recognizing a number as low as 5 without ten zeros attached to it.

Seriously though, as someone who has both never seen a Transformers movie start to finish and yet talks about them like they're the death of filmmaking, I say power to him. His movies *are* a source of enjoyment for millions of people, for better or for worse, in the same way that many (some) of us still consider Adam Sandler funny. As long as he keeps making more money than entire economies with each successive entry, who are we to tell him when enough is enough?