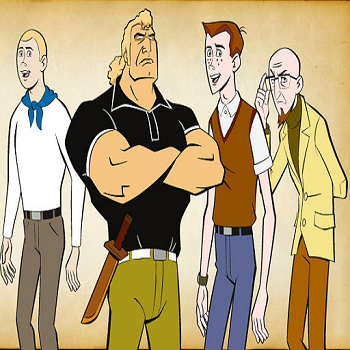 Making a show as truly original and funny as The Venture Bros. doesn't happen overnight, which is why it has rightfully been held in the same light as Arrested Development and The Simpsons, even earning a spot on IGN's "Best 100 Animated Series" list (at #56). Still, any show that regularly spends upwards of two years in between seasons can leave even the most casual of fans feeling a little anxious.

With season 5 of The Venture Bros. having wrapped up in July of 2013, we've been expecting an announcement from Adult Swim regarding their longest running program any day now, and yesterday morning, that's just what we got!

Yes, The Venture Bros. will in fact be returning at the end of the month for an eight episode sixth season, per a press release from Adult Swim.

Location, Location, Location! Perfectly situated in the heart of New York City, season 6 of The Venture Bros. is a billionaire's dream come true, offering the discerning buyer top-of-the-line drama and panoramic danger in every direction. Super-scientists, bring your loofah! Relax and unwind from a long day in the lab in your luxurious, spa-like, master bath, where floor-to-ceiling windows offer spectacular views of approaching enemies from every direction. This eight episode, 3 BR, 2 BA stunner comes with its own dedicated robot, plus servants' quarters for live-in bodyguard.

Luckily for us, we don't have to be actual billionaires to get in on the prime real estate that is The Venture Bros. season six.