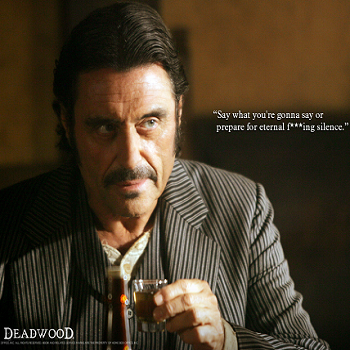 Everyone's favorite expletive-laden western, which wound up on the wrong side of a bullet back in 2006, is being resurrected as a movie, per HBO.

Despite only spanning from 2004 to 2006, HBO's Deadwood was able to gain quite a notorious following in its time, thanks in no small part to a ruthless, foul-mouthed cast led by Timothy Olyphant, Ian McShane, Molly Parker, and Dayton Callie.

Recently, however, there have been rumblings (mainly from HBO and former Deadwood co-star Garret Dillahunt) that the western would be coming back in the form of a feature length film -- an increasingly popular option for cult shows nowadays, it would seem. Earlier today, that news was confirmed by HBO's president of programming, Michael Lombardo.

"David (Milch) has our commitment that we are going to do it. He pitched what he thought generally the storyline would be-and knowing David, that could change. But it's going to happen," Lombardo promised, adding that Milch feels he has "something left unsaid" in the violent South Dakota town.

As is always the case with these kinds of things, the Deadwood revival does not come without a few strings attached. For starters, show creator, writer, and producer David Milch is currently working on another project at the moment, so no timetable for the return of Sheriff Seth Bullock and the rest of the gang has been set as of now. And given the ever-busy schedules of stars Olyphant and McShane these days, who knows how the scheduling will have to work out. But to loosely quote Al Swearengen, "pain or damage or prior commitments don't end the world."