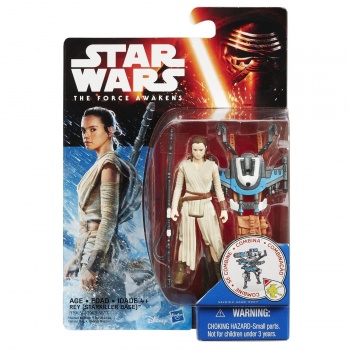 J.J. Abrams says it is "preposterous" that Rey is being excluded from various The Force Awakens merchandise sets.

Merchandising is such a massive part of Star Wars, that it should come as no surprise that The Force Awakens has brought with it a new wave of Star Wars toys, Star Wars clothing, and Star Wars oranges. However, fans were quite dismayed to discover that main character Rey was absent from multiple merchandise sets, including Hasbro's official Star Wars Monopoly. Turns out even director J.J. Abrams has a few things to say about that, as he has called out the lack of Rey merchandise as "preposterous".

"I wish I had more details about merchandising and the schedule," Abrams told Entertainment Weekly. "I'm learning things as you are. I will say that it seems preposterous and wrong that the main character of the movie is not well represented in what is clearly a huge piece of the Star Wars world in terms of merchandising."

Abrams continued to explain that he "read that she wasn't in the Monopoly game and was quickly making phone calls about this because if it were true - and it is true, and now Hasbro, of course, has said they're going to put Rey in - it doesn't quite make sense why she wouldn't be there. She's somewhat important in the story."

This is important because toy manufacturers were pulling the "we wanted to avoid spoilers" line when discussing the lack of Rey figures. But if Abrams, with his known aversion to spoilers, is upset about it, then it's kind of a moot point.