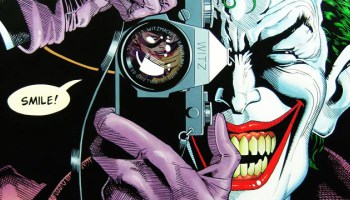 The animated film adaption of The Killing Joke will add more to the original story.

During an interview with ConTV (via Comicbook.com), Executive Producer Bruce Timm stated that, although he isn't allowed to discuss the casting or story specifics for the upcoming animated film adaptation of Batman: The Killing Joke, the team is trying to stay "very faithful" to the source material.

"Whenever we do an adaptation of a really famous iconic comic... we try to stay very faithful to the comic, to the source material, as much as possible," Timm said. "Killing Joke is a really tricky property because it's really bleak, but we made a decision early on that if we're gonna do it, then we kinda have to just jump in and just do it."

"The one big difference about it... is The Killing Joke, the source material is really not long enough to make an entire feature film out of, so we actually had to add a lot more story to it. Which is tricky," Timm continued. "But I think we came up with a really good solution on how that worked, and beyond that I can't really say anything more until July, or whenever it comes out."

The film adaptation was announced in July. At that time, it was revealed that the film will feature an "original 15-minute prologue that helps set up the story, giving even longtime fans of the story something new to look forward to."

The film will premiere at San Diego Comic-Con, which runs from July 21-24.