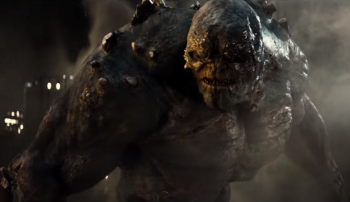 According to director Zack Snyder, there's a lot more to Doomsday's mythology than the Batman v Superman: Dawn of Justice trailer could show.

Last month's Batman v Superman: Dawn of Justice trailer certainly had some surprises for fans: It gave us Wonder Woman's big reveal, teased the existence of Parademons, and even broke out Doomsday for a final climactic throwdown. But why go with Doomsday in a movie that's already jam-packed with characters? According to director Zack Snyder, that's because Doomsday's mythology has a role that might come into play for the upcoming Justice League films.

The context for this reveal kicked off last week, when Snyder discussed how Batman v Superman will lead into Justice League. "In a weird way, Justice League is the next step for these characters to form a bigger team," he said. "Maybe there's a bigger enemy to fight." When asked more recently to elaborate on this bigger enemy, Snyder answered: "Well, you have Doomsday, right? He doesn't just crawl out of the ground. He has his own mythology, right? So that has to be explored."

We can't say for certain what role Doomsday will have in Justice League. After all, exploring his "mythology" is a very different thing from making him a major Justice League villain. But Snyder's comments do suggest that Doomsday's origins will connect to the larger DC cinematic universe - to the point that it influenced the decision to reveal Doomsday in this trailer. "To us it really made sense to give [Doomsday] to the audience now," Snyder explained. "I really wanted to make the audience a promise that... though I'm super excited and happy and fulfilled by the conflict of Batman and Superman, there's also a bigger world to start to think about."

And while we're on the topic, remember how spoilerific that trailer seemed to be? Snyder hastened to add that while we know Doomsday's coming, that doesn't mean we know everything about his Batman v Superman plot line just yet. "I know what's in the movie, so I know there's other stuff," Snyder laughed.

Source: The Daily Beast, via GamesRadar