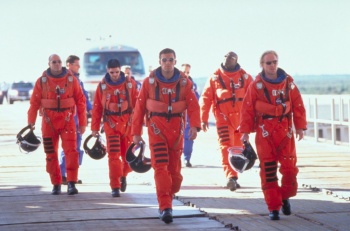 Planetary Defense Officer might be the most badass job title NASA's created yet.

Are you a tough as nails hero looking for work? Won't settle for anything less than saving the world? Well, great news! NASA has created a new organization dedicated to precisely your line of work: The Planetary Defense Coordination Office. Members of this elite branch will be responsible for tracking asteroids and other deadly near-Earth Objects. And when one such object poses a threat to humanity? Planetary Defense Officers will be responsible for coordinating efforts to knock them off course with extreme prejudice.

"Asteroid detection, tracking and defense of our planet is something that NASA, its interagency partners, and the global community take very seriously," John Grunsfeld, associate administrator for NASA's Science Mission Directorate in Washington explained. "While there are no known impact threats at this time, the 2013 Chelyabinsk super-fireball and the recent 'Halloween Asteroid' close approach remind us of why we need to remain vigilant and keep our eyes to the sky."

NASA has detected over 13,500 near-Earth objects of varying sizes across its history, and now finds roughly 1500 new objects each year. For that reason, this organization will be a central office tasked with asteroid detection and impact mitigation. Officers will be responsible for tracking NEOs in our skies while posting warnings and close pass reports for the public. The office will also create disaster response plans alongside FEMA and the Department of Defense, in case an impact turns out to be unavoidable.

We even have our first Planetary Defense Officer - which I can't stress enough, is an actual job position that currently exists. The coveted role goes to Lindley Johnson, longtime executive of the NEO program. "The formal establishment of the Planetary Defense Coordination Office makes it evident that the agency is committed to perform a leadership role in national and international efforts for detection of these natural impact hazards, and to be engaged in planning if there is a need for planetary defense," Johnson said, presumably while chewing up asteroids and spitting out pebbles.

Okay, I'll admit that the actual work of the Planetary Defense Coordination Office involves more meetings and paperwork than it would drop-kicking a comet. But all the same, there is now an office dedicated to planetary defense, which is basically a sci-fi movie fan's dream come true.