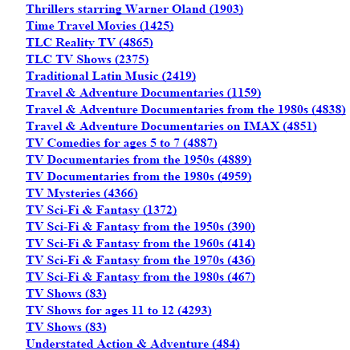 In the mood for a "French Language Crime Comedy?" How 'bout a "Gritty Western from the 1950's?" These new Netflix codes will satisfy even the pickiest of moviegoers among us.

Netflix: We watch it, we discuss it at work, we use it as a cover for doing the dirty. But if there is one complaint we could register with the kings of the streaming service industry (or at least the princes), it's that their pre-selected categories tend to be a bit...vague. God forbid you happen to share an account with friends or family incapable of adding a separate profile (talking to you, Uncle Larry!), because the "Recommended" and "Because You Watched" sections will lose all meaning completely.

Even if you just happen to be in a very particular mood for, say, a suspenseful courtroom drama from the 1980's or a violent independent movie based on a book, then selecting from Netflix's pre-selected "drama" or "thriller" categories just won't cut it. Thankfully, the folks over at What's on Netflix have recently discovered a simple code than can help you access thousands of insanely specific categories -- a "Netflix ID Bible" if you will.

How does it work? Simple, you just fnd your genre of choice on this incredibly-detailed list, then type the corresponding number at the end of the following URL: http://www.netflix.com/browse/genre/XXXX (replacing the x's with your numbers, of course)

And just like that, you're watching "Children & Family Movies directed by Vic Finch." That's right, THE Vic Finch!

Finally, the hassle associated with binge-watching entire seasons of television from your couch has come to an end (and not to mention, no more back pain!). So if its the stress of surfing that's been keeping you away from Netflix, check out the list of codes and fear no more!