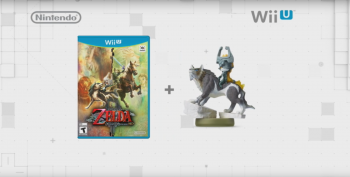 According to a listing on Amazon France, Zelda: Twilight Princess HD will have a new dungeon accessed via the new Wolf Amiibo.

Love 'em or hate 'em, it's become clear that amiibo has become a very important part of Nintendo's bottom line. Usually unlocking small bonuses in game like skins and items, they have sometimes been used to gate-off entire levels, as in Splatoon's case. Now, if a listing from Amazon France is to be believed (via NeoGAF), the upcoming HD remake of Twilight Princess will also have an amiibo-gated level.

"Unlock bonuses with The Legend of Zelda amiibos: Tap all the amiibos for the Zelda series to unlock bonuses in the game, such as regenerating your life, or getting arrows for your bow. The new Wolf Link amiibo even allows you to get into a new dungeon: 'The Twilight Cave'. The data recorded on this amiibo can even be transferred to the next episode on Wii U," claims the listing.

At this point, we can't tell how substantial the dungeon will be, or if it will be available via any other means (such as an eShop purchase). For comparison, the additional levels granted by Splatoon amiibo are as of now not available any other way.

Other information revealed the the Amazon France listing is a new "Hero Mode" which will immediately be unlocked right from the get-go, and the fact that the game's inventory screen has been moved down to the Wii U's gamepad.

We've reached out to Nintendo for confirmation.