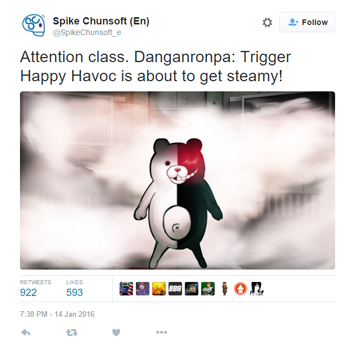 With each passing week, that leaked list of supposedly upcoming Steam titles discovered by NeoGaf users last year seems less like wishful thinking and more like stone cold prophecy. It's not an official confirmation just yet, but a recent tweet from Spike Chunsoft's official twitter account heavily implies that the excellent Danganronpa: Trigger Happy Havoc will be the next game on that list to grace Valve's servers.

Obviously there's no information in the vein of "when" or "how much," but the wording does seem to imply that we'll be seeing the game on PC sooner rather than later.

For those who haven't played it, Danganronpa is a quirky Visual Novel-style adventure game about a bunch of kids trapped in some kind of prison school with a maniacal stuffed bear. The only way to escape is to murder another student and get away with it. The non-homicidal students have to root out and convict suspected murderers or they'll die too. It's tense stuff with a genuinely twisted sense of humor. Former Escapist contributor, Jim Sterling, gave it a smooth four out of five back in February of last year. There was an anime adaptation released a while back, but it honestly didn't do the game justice.

So for those keeping track, that's three games from the leaked list down. Using this data, I can say with one hundred percent certainty that Half Life 3 won't be announced sometime this year.