These cell-shaded pictures of "Turtles in Manhattan" all but confirm the existence of the game.

Remember how we reported that Bayonetta dev Platinum Games was probably working on a Teenage Mutant Ninja Turtles game? Well, thanks to our friends over at Pure Xbox, we've now got some pretty definitive proof of the game's existence, in the form of these five in-game screenshots:

The new game will be entitled Teenage Mutant Ninja Turtles: Mutants in Manhattan, and from the looks of things, appears to be a cell-shaded 3D beat-em-up, probably with multiplayer elements. Earlier in the year, the game was classified for release in Australia, and given an "M" for Mature rating. The game was also classified in Brazil a few weeks earlier, which revealed it would be releasing on PS3, PS4, Xbox 360, Xbox One and PC.

The Pure Xbox source also leaked the game's official box art, but it is a rather small and low quality image: 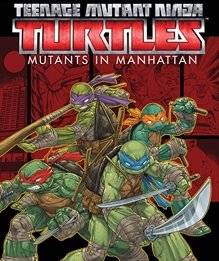 That's all we know for now, but we have reached out to Platinum Games as well as Activision (the reported publisher) for more information.