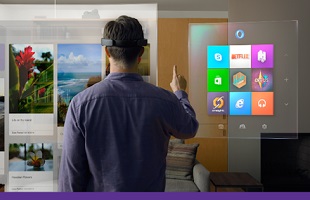 Microsoft says that the HoloLens will only last 2 and a half hours when used under a "heavy load".

Microsoft's upcoming half VR/half augmented reality headset the HoloLens is poised to propose an alternative to the heavy hitting VR headsets coming out recently. In an interview with Tel Aviv, Microsoft's Bruce Harris talked a bit about the device, specifically, how its battery life will only run around 2.5 hours when under a heavy load.

Harris claims that the HoloLens will last up to 5.5 hours when under "average" use. Unfortunately for us gamers, gaming pretty much falls under the heaviest load a PC can be under, so it looks like you'll only get 2 and a half hours of play time before having to recharge.

For comparison, the Wii U's gamepad has a battery life of somewhere between 3-5 hours, and that was already causing some annoyance to gamers.

Harris did however say that Microsoft was working hard on improvements to the device's battery life, and expects the retail unit to have a much longer life.

He also addressed the "field of view" concerns that some developers were already having. He explains that using the HoloLens will be similar to looking at a 15-inch monitor that's around two feet from your view, and while the retail edition's field of view won't be "hugely different" from the current dev kit, it will have some improvements.

Lastly, Harris gave us some pretty exciting news: you'll be able to link several HoloLens devices together, meaning two or more HoloLens users will be able to examine the same object (or play the same game, maybe?) in real time.