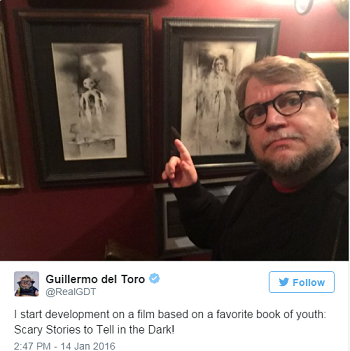 Alvin Schwartz's horrifying children's anthology will be receiving the movie treatment it has long deserved.

While Guillermo Del Toro's latest effort, Crimson Peak, may not have been the box office success he envisioned (no doubt thanks in part to some wonky Chinese censorship laws), the director's reputation remains as strong as ever. In fact, Crimson Peak actually received mostly positive reviews across the board, with critics citing Del Toro's visual mastery of modern, gothic-tinged horror as the driving force behind the film's narrative sucesses.

For those familiar with Del Toro's body of work, the critical praise comes as nothing new. The Mexican-born director has shown a knack for subtly blending fantasy and horror elements into his films dating back to his 2001 Spanish feature The Devil's Backbone, and most notably, with 2006's Academy Award-winning dark fantasy film, Pan's Labyrinth. So when determining which director would be perfect to adapt, say, the classic children's horror anthology, "Scary Stories to Tell in the Dark," you'd like to think that Del Toro's name would be somewhere near the top of that list.

Thankfully, it appears that Del Toro is already two steps ahead of us, as he announced plans late last week to bring "Scary Stories" to the big screen via Twitter.

While it's not yet know whether or not Del Toro will serve as the upcoming film's director, he is already locked into the project as a producer, so it's safe to assume that "Scary Stories" will feature many of his signature touches before all is said and done.