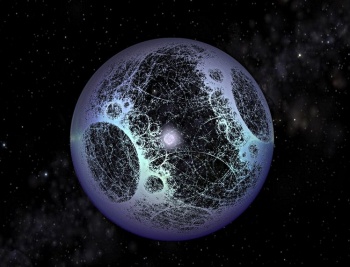 The galaxy's most mysterious star only becomes stranger, as the more typical explanations for its dimming light are disproved, one by one.

It is important to remember that astronomers are people - they are subject to fancies and hopes, and are prone to see what they want to see, every now and then. Any given astronomer wants, deep down, to say, "it's aliens!" as much as any of us do (or more so). They can't, though; they have to assume all the likelier possibilities first. That UFO you saw? Probably a plane. Your government? Probably not reptiles from Neptune.

It's with that being said that we come to KIC-8462852, also known as Tabby's star, after its discoverer, Tabetha Boyajian. Tabby's star is an F-type - just a little more massive, a little hotter than our friendly G-type sun. It's not even a speck to the naked eye, existing about 1500 light years distant.

Tabby's star is weird. The light we receive from it fluctuates; fades and surges, like some massive thing is dancing across its surface. Space is full of massive things, true - but none of the usual suspects match the shadows passing over KIC.

In the past we've eliminated a particularly robust asteroid belt, even a massive planet eclipsing its star. KIC's light dims by as much as 22%, occasionally; even Jupiter, our solar system's go-to "pretty big planet," would hardly occlude 1% of the light from our smaller star at that distance. It isn't a trick of perspective, where one object is racing towards us from the star, growing larger in our eyes, since the light changes as if something were moving laterally. Whatever this is, it has to be local to Tabby's.

The most recent hypothesis was comets; some time ago, a rogue star might have visited Chez Tabby, trailing a cloud of rock-ice that got caught up in our friend's gravity well. As it turns out, no dice: it ain't comets.

See, without realizing it, we've been photographing KIC-8462852 for over a century. Before 1989, we'd accumulated 1200 photos featuring the mysterious gas-ball. Accounting for the changing technology over the years, we've learned that the star's light's been fading very gradually, in such a way that comets can't account for.

This is where aliens come in. The list of possible objects that could cause the light fluctuations we've been seeing is growing quite small, and features a few artificial objects, not least of which is a Dyson sphere.

That is, in short, a structure built around a star in order to maximally harvest the star's energy. It's a heck of an undertaking, and one that can't happen naturally - some sentient force has to make it happen. It might account for the star's gradual fading (it is being slowly bricked over), and for the occasional massive changes (a large, flat piece of sphere moving very close to the surface of the sun).

"Aliens" is by no means the sure answer. The dimming we've seen over the past century has by no means been consistent, which doesn't gel with our ideas about building a Dyson sphere, for one.

The lesson to take from Tabby's star is this: you shouldn't expect any astronomers to declare about your favorite astral phenomenon, "it must be aliens." Sometimes, though, even the most scientifically-minded of us are happy to say it might be.