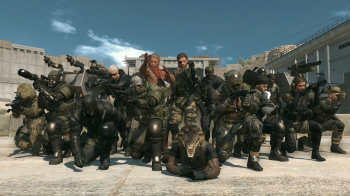 Plus 3000 gear points if you enter one match before January 26.

Metal Gear Online, The Phantom Pain's competitive online multiplayer mode, has left beta on PC and jumped right into an official launch. In addition, there is an "extra incentive" planned: players who participate in a minimum of one match prior to January 26 will be rewarded with 3000 bonus gear points, which can be used to customize your characters' clothing.

"The Beta has officially concluded and the game is now available for launch," a Steam update reads. "We took in a lot of feedback and made a few key adjustments. After some initial hiccups we're going forward guns at the ready. However that doesn't mean we've stopped development, quite the contrary. Just like the previously released console versions of MGO, we'll be integrating new updates to the game to improve the experience and add content."

"2016 is shaping up to be an exciting year for MGO, and with your continued support we'll take it even further!"

Metal Gear Online launched on consoles in October, but was almost immediately plagued by issues, most notably the inability to connect and the loss of connectivity.