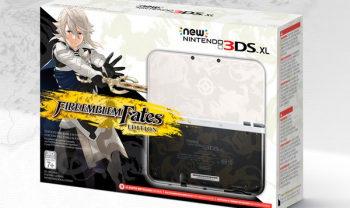 In a press release today, Nintendo announced a new special edition Fire Emblem Fates 3DS XL. The system will cost $199.99, and will launch alongside Fire Emblem Fates on February 19. However, it will not include a copy of the game.

Fire Emblem Fates will include two different versions of the game, Birthright and Conquest. They are each $39.99, but you can purchase the second for $19.99 via download. A third DLC story, Revelation, will be available digitally on March 10 for $19.99 for anyone who already owns a copy of the game. A special edition will also be available that includes all three games on a single game card, an artbook and a Nintendo 3DS XL pouch for $79.99.

Nintendo also highlighted the game's future DLC, which will come in the form of new maps, "released on a regular basis."

"When the game launches, further downloadable content in the form of new maps will also be released on a regular basis, with the first map launching on Feb. 19," Nintendo said in a press release today. "Players can choose to buy each of these maps individually, or purchase Map Pack 1 for $17.99 to get access to them all at a discount once they are released."

Pick up a New #3DS XL system w/ art inspired by #FireEmblemFates on 2/19, just in time for the launch of the game! pic.twitter.com/qkeuXjfYnL— Nintendo of America (@NintendoAmerica) January 20, 2016

Nintendo also promises that fans of role-playing games can expect a continued trend of "high-quality RPGs."

"Fans of role-playing games have just received a boost to their excitement stat," said Scott Moffitt, Nintendo of America's Executive Vice President of Sales & Marketing. "Nintendo platforms have always been home to high-quality RPGs, and with even more games launching in 2016, this trend is set to continue in a big way."