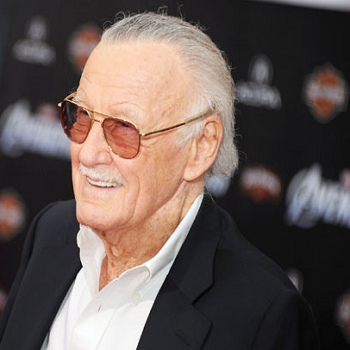 It would appear that someone's been getting into Thor's liquor.

Apparently having just seen Patton Oswalt's epic Parks and Rec filibuster (see below), the legendary Stan Lee has now thrown his full endorsement behind the idea of combining the Marvel and Star Wars universes. To loosely quote what my grandmother said while viewing my one-man show based on the life of Jeffrey Dahmer, "Oh God, the horror."

In an interview with The Big Issue, Lee pondered, among other things, what it would be like to see Luke Sywalker as an Avenger.

"Obviously the people who produce these (movies) are looking to be as successful as possible," said Lee.

"If they feel that incorporating Star Wars with the Marvel characters will be very successful, they'll find a way to do it. Can you imagine Spider-Man saying, 'May the force be with you?' It may come to that!"

"I created the Avengers by taking many of our characters and making a team out of them," Lee continued.

"We can have as many characters join the Avengers as we want to for future movies. That might be fun, all of a sudden Luke Skywalker is an Avenger!"

In all seriousness, does anyone actually think this is a good idea? The online reaction thus far has seemed to range between "No" and "Has the old man finally lost it?!" with some going as far as to call this a blatant cash-grab move by the legendary comic book writer (who already has more money than God, I would assume). Even as someone who is admittedly not the most knowledgeable Star Wars or Marvel fan, the logistics of pulling off a crossover the likes of this just seems...staggering. The Avengers: Infinity Wars two-parter is already set to include some 67 characters from the Marvel universe (or something close to it) and we're talking about adding all the Star Wars characters to that?!

I'm tired just thinking about it. Thankfully, we'll have until at least 2019 to mull this insanity over, when both Infinity Wars and Episode IX will be wrapping up. In the meantime, check out Oswalt's aforementioned proposition below.