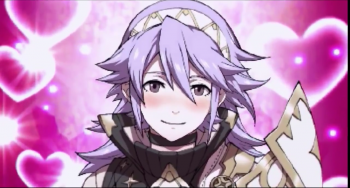 A controversial scene, which drew comparisons to "gay conversion therapy," will not be included in the Western release.

In a statement provided to Nintendo World Report, Nintendo revealed that a controversial scene and conversation will be removed from Western versions of Fire Emblem: Fates.

"In the version of the game that ships in the U.S. and Europe, there is no expression which might be considered as gay conversion or drugging that occurs between characters," a Nintendo representative wrote.

The statement appears to refer to a scene in which an apparent gay character, Soleil, has her drink spiked with a "magic powder" that makes women appear to Soleil as men, and men appear as women. This is done by the protagonist, in an effort to help the character, who is having difficulty speaking with other women. Soleil falls in love with the protagonist, who she continues to love after the powder wears off and he returns to a male in her eyes. A marriage proposal can follow this.

This scene is one of many that occurs when players pair up with a wide range of both male and female characters, where many can build relationships that eventually lead to marriage.

It's not immediately clear whether the scene will be removed entirely, or altered. We have reached out to Nintendo for more information.